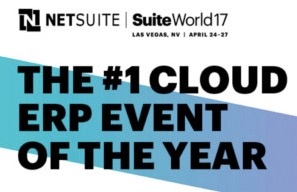 The Vested Group has atteneded SuiteWorld for several years now and we always find a great deal of value at NetSuite's annual conference.  From informative keynote speeches and breakout sessions to networking with customers, potential customers, and NetSuite folks, SuiteWorld has something for everyone.

We are excited to announce that The Vested Group will be sponsoring SuiteWorld 2017!

We are still in the planning stages as far as our booth goes, but we promise to be a booth you won't want to miss!  Keep your eye on our blog or The Vested Group LinkedIn page for our SuiteWorld 2017 booth location updates and information.

You won't want to miss keynote speakers, Evan Goldberg, Jim McGeever, and Jason Maynard in addition to the 175+ informative breakout sessions.  Get inspired, learn something new about NetSuite, and network with other NetSuite users at SuiteWorld 2017!

If you want to make sure you connect with The Vested Group, drop us line and we'll make sure we touch base with you in Las Vegas!