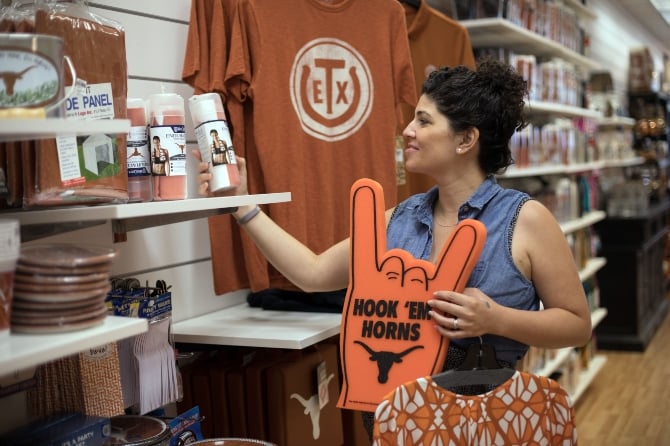 The University of Texas is home to one of the most popular college football teams in the country, which means gamedays generate a massive spike in business for University Co-op.

On a typical day, the campus store’s Austin location will generate about $25,000 in sales. When the Longhorns hosted Louisiana State University for a highly anticipated matchup on Sept. 7, the Co-op sold $50,000 worth of merchandise in a single hour and sales from the weekend surpassed $1 million.

That passionate fanbase, along with a student population of more than 50,000, help make the Co-op one of the biggest independent campus retailers in the country. Founded in 1896, the primary campus store for UT Austin earns about three-quarters of its revenue from general merchandise like apparel, accessories and gifts. The remainder of the Co-op’s revenue comes from products often associated with a college bookstore, like textbooks and other course materials. The only days that might generate as much revenue as the Texas-LSU game are the first and second day of classes.

While the Co-op is independent of the university, all its profits fund scholarships for students, grants for student and faculty research, student events, student organizations and a membership program offering students 5% off course materials. A Board of Directors decides how to allocate profits each year.

“Our assortment really reflects what our community wants and the flavor of our business,” said Leslie Smith, the Co-op’s vice president of marketing and merchandising. “We have a unique assortment of course materials, school supplies, art supplies and Longhorns merchandise that meets the needs of our community.”

Responding to the digital shift

Like other campus retailers, the Co-op’s textbooks revenue is on the decline. The number of textbooks sold is not necessarily dropping, but more students are opting for digital versions. Those e-books are cheaper, sometimes a fraction of the price of the physical version, and now account for more than 17% of all course materials sales.

“Textbooks flipped quickly because of college students tending to be early adopters in that realm, so that hit us hard and fast,” said Jer-el Martinez, director of management information systems at the Co-op.

The business has largely made up for those losses by selling more general merchandise, like shirts, hats and outerwear. It helps that the Longhorns’ burnt orange logo is one of the most recognizable in college athletics.

Though not as recent a change, more buyers moving online over the last decade-plus posed its own challenges. Online orders required the Co-op to staff its store almost 24 hours a day for two weeks at the start of each semester. The retailer also closed several satellite stores throughout The Lone Star State, viewing the online store as the satellite store for all alumni. (The Co-op still has one small satellite store outside of Dallas.)

As shopper preferences shifted, the Co-op’s Sequoia Retail Systems solution, designed specifically for textbooks, held the company back. So in 2012, it moved to a retail solution from Celerant Technology. However, Celerant could not handle the complexities of textbooks, so the Co-op tried to integrate Celerant with Sequoia and a separate accounting system. It was hardly a perfect solution.

“We had a lot of inventory problems, a lot of costing issues, particularly when you’re talking about inventory management and textbooks,” Martinez said. “Information was passed between multiple systems and it caused a lot of confusion and we lacked transparency into the numbers.”

The dated Sequoia system could not manage e-books or rentals, meaning students had to go through an entirely separate sign-up process for those.

Additionally, the Co-op managed two different sites for desktop and mobile. If the Co-op wanted to highlight Longhorns gear after a big win, for example, it had to update both sites, which didn’t always happen and led to missed opportunities.

The Co-op hits the reset button

Just five years after implementing Celerant, the Co-op decided to look for a single platform that could handle all aspects of omnichannel retail. The independent campus store heard about The Duck Store and University Book Store moving to NetSuite and eventually elected to follow suit.

Decision makers recognized the importance of a true cloud solution that would meet the store’s current and future needs.

The Austin-based organization implemented NetSuite in 2018 to manage accounting, inventory and order management, ecommerce and point-of-sale. The unified system means data is both accurate and consistent across platforms, so an online customer, the textbooks team and the warehouse staff all see the same inventory numbers.

“The biggest thing is being able to trust the numbers,” Phifer noted. “If you can’t trust your numbers, how can you run a business? It could run you out of business.”

Additionally, changes to items go through in 15 minutes, a vast improvement over the previous 12-hour cycle. If someone forgets a decimal point when listing a new item, for example, it has much less of an impact.

The visibility of information and ability to drill down into it helps each department’s leaders to unearth new insights to make better decisions. Efficiency gains allowed the Co-op to downsize its accounting team from eight to five full-time employees and its IT department from three to one full-time staffer. During the start-of-semester rushes, the store is staffed 15-16 hours/day instead of around the clock.

Online revenue climbed 45% and ecommerce conversion rate increased 43% after moving to NetSuite’s SuiteCommerce Advanced solution. The Co-op’s new ecommerce site is also device- and browser-agnostic, so it only has to update one site, and students can now purchase e-books and rent books through the site.

In the stores, all registers are de-centralized with NetSuite Point of Sale, so if one register fails, it doesn’t affect any of the others. In the past, if a server went down, all or a large portion of the registers would not operate.

But perhaps the clearest sign of improvement comes on football weekends, when fans and students mob its 36,000-square-foot store adjacent to campus.

“I’ve been here 12 years, and the chaos-to-dollar ratio on these past couple gamedays has been much better than it ever has in the past,” Martinez said.

The Co-op is focused on growing online sales and improving operations to maximize efficiency over the next few years. But it’s also trying to identify an out-of-the-box product sector that could drive future growth.

Whatever the campus retailer decides to start selling, and whatever else the future holds for the organization, it’s confident NetSuite will meet its shifting demands.

“I think the Co-op in our over 120-year history has carried a lot of different product lines, we’ve been in a lot of different businesses,” Smith said. “And we think we found a system that’s flexible enough so that when the next thing does reveal itself – whether it’s a new way of delivering course materials, a new way of buying product – our system is able to support it.”