How Corkcicle Expanded Without Losing Its Cool 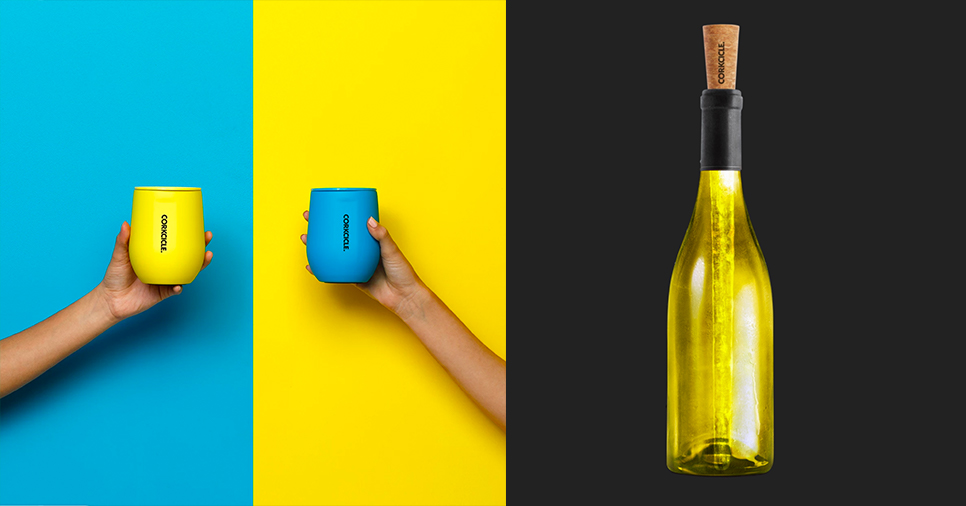 It’s the modest way to tell the story, but sometimes, you do get lucky, particularly if you agree that luck is a combination of preparation and opportunity.

The Corkcicle Air is an in-bottle wine chiller that keeps your Chardonnay (co-founder Ben Hewitt’s beverage of choice) or other wine a drinkable temperature as you enjoy it. It eliminates the bulk of a bucket or the need for refrigeration.

And it became Hewitt's brainchild in 2010; that’s when his "luck” started to kick in.

Hewitt was savvy enough to recognize his invention wasn’t necessarily a fit for online-only sales, which was the trend at the time. Instead, he set his sights on selling the product (which then went by a shorter moniker, just “Corkcicle”) in-stores. With his partners -- Eric Miller and Stephen Bruner also lead the company -- he networked his way to a Chinese manufacturer who took a molded plastic product through 37 versions of a prototype before delivering the final version.

“When we received it in the states (from China), it was a final product. It was packaged, (it had a) UPC,” Thomas said. “It was a benefit that they (the manufacturer) were used to working with injection mold plastics and some of the other things were really just components that we would buy.”

The last bit of luck was Corkcicle’s being in the right place at the right time, including on Oprah Winfrey’s 2012 list of “Favorite Things.”

But hitting it out of the park with that first product didn't grow Corkcicle into a 60-person company in eight years, nor to $65 million in sales in 2019, nor to its presence in 32 countries. According to Thomas, developing a second, related product -- then a third, and then entire product lines -- contributed to those achievements.

Hewitt launched with the prototype Corkcicle in 2011 at The Atlanta International Gift & Home Furnishings Market, an annual trade show where retail buyers, mostly from small stores, can connect with wholesalers and get the scoop on trends in the retail marketplace.

“We marketed it (the Corkcicle) really well,” shared Thomas, who joined the company in 2012. “It was a highly profitable product for gift store owners, and it had a really small footprint. They could buy 16 of them, (and) wholesale was like $187 (total). They could turn around and sell them in … two days. We got a lot of orders, they got a lot of sales. It had a great price point and decent margins for us, and that was it."

From there, “it was sort off to the races,” he added.

“We marketed it (the original Corkcicle) really well. It was a highly profitable product for gift store owners ... and that was it."

The team continued on the trade show circuit, attending New York Now, the Dallas Total Home & Gift Market and shows at the Las Vegas Market. Over the next couple of years, based on a “two shows in the winter and two shows in the summer” schedule, the company found a rhythm of product development and manufacturing.

But it didn’t start out with a smooth cycle at all.

“One of our main challenges was trying to figure out what the lifespan of product was going to be and how much to buy (from the manufacturer). In the early days we would air freight vs. shipping by boat quite a bit because we were rushing to get product out to the market,” Thomas said. “In the beginning it was keeping up with inventory demand and not overbuying.”

“One of our main challenges was trying to figure out what the lifespan of product was going to be and how much to buy (from the manufacturer).”

Over the years, the company found balance in how much to spend on inventory and product development vs. marketing, as well as how many sales to expect per marketing dollar. This was a matter of “refinement of the process and timing, as well as bringing in experienced personnel,” Thomas said.

“While we all had business experience in many areas, certain things were new to us like EDI (electronic data interchange, the computer-driven exchange of documents, like purchase orders and invoices,  between businesses),” he added “I had experience with EDI but not executing it, so I found outsource partners to help me through it.”

Later on, the team replaced those outsource partners with a full-time EDI integration leader.

Today, Corkcicle has a steady and ongoing production cycle, which sets them up to launch new products somewhat seamlessly. Thomas noted this is done in line with the six-month production cycle established in the company’s early days. This means the company has finished a prototype, “PO’ed for it” (filed a purchase order) and received it in their warehouse before they go to a January trade show, then does the same for the summer.

The routine helps Corkcicle plan its cash flow and manage inventory so there’s never a crisis with either, always a good position to be in.

“I will say that early on we didn’t have that longevity or time to plan this far in advance," said Thomas, who is already planning product for 2021. “ (At the beginning) it was more like, ‘We’ve got to come up with something new.’”

Corkcicle now has over 20 products.

When the company was ready to expand from just one product (or SKU) called the Corkcicle eight years ago, they decided to introduce a variation called the Chillsner. It’s an “in-bottle, drink-thru beer chiller” designed to fit into a beer bottle.

Sales of the Corkcicle weren’t down when the team introduced the Chillsner; the company simply wanted to reach another segment of the limited audience in their retail industry sweet spot.

“We learned that people already had one (Corkcicle). It was truthfully the gift of the gift industry for quite some time,” said Thomas, who noted independent retail stores tend to have a set customer base, so repeat purchases of the same product can be hard to come by.

The company knew from its trade show observations that the Chillsner would allow it to transition into the “male” market “a bit more than what we were with the white wine, if you will,” he added. "From there we sort of looked at our product line as a tree.”

That means all Corkcicle’s products, which now includes drinkware, cooler bags, lunchbox, barware and other accessories, have a piece of DNA of the original Corkcicle in them. For example, the Corkcicle Air, the Chillsner, the Tumblers and the cooler bags all help keep beverages cool or insulated.

Every Corkcicle product, including the Classic Tumbler, shares the brand's DNA of "keeping beverages insulated."

Growing the market base

Forging a new product revenue stream like the Chillsner is one thing. Then there’s making sure you’re maximizing each stream, explained Thomas.

By 2013, the company “knew we could take the product and do some different things with it,” he said. "That was one thing that we did focus on.”

They tweaked the original Corkcicle product by adding a simple, metal, dome-shaped cup that anyone could customize with a sports team logo or design. The goal was to reach wine drinkers who had already purchased a Corkcicle but also really loved a college football team, for example, and thus were inclined to purchase the new, customized product.

Now, there are sports teams and other branded Corkcicle Airs, Chillsners and Tumblers out there, along with different colors.

At first, Thomas said, the company was limited in its ability to offer these customized products because of challenges that come with high SKU counts, which often include the need for more customer service manpower, storage space, time spent order picking and more. Once they were able to smoothly expand into Hydration Products (Canteens, Tumblers, etc.) and more barware, those areas of the business saw “explosive growth.”

Corkcicle’s Canteen product can be customized with the Clemson University logo.

Corkcicle’s story suggests that routinely unveiling new products can help your company grow. Don’t allow perfectionism to stall the process, Thomas advised. He said that when you’re working on a new product, of course you want it to be the best it can be, but you should also be cautious about repeatedly delaying launches with tinkering.

“I think the one thing you have to be careful about is trying to perfect a product," he said. "I can wake up at 3 a.m. every night and figure out a way to make the product we’re working on right now better. But every time I make a change, I push the launch date back.”

“I think the one thing you have to be careful about is trying to perfect a product."

He tries to remember “there’s always a phase two.”

Thomas's advice is to set a goal launch date and make the best product you can by that date. Then, if you want to tinker with the product further, set another goal.

That’s a piece of advice that all founders could raise a perfectly chilled glass to.

This article was originally posted on growwire.com